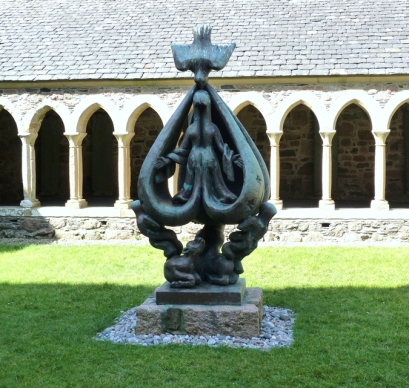 John Philip Newell is an author of numerous books on Celtic Spirituality. He begins his book the Rebirthing of God with a fascinating story and perspective:

On Iona, every time I return, the first place I long to pray is the ruins of the thirteenth-century Nunnery. This is not to belittle the rebuilt Abbey of the same period up the road, a place of prayer that holds fond memories for me. But the deeper stirring of attraction in me is for the Nunnery. I am not alone in this. Increasingly, I find others sharing this sens of holiness-individuals praying in silence or groups celebrating simple ritual and dance together. What is this all about?

The Abbey is enclosed. It has a roof and four strong walls. The Nunnery, on the other hand, is open. It stands free to the elements. There is a yearning within us to come back into relationship with all things. The ancient Celts spoke of the cathedral of earth, sea, and sky. This is the yearning-new and at the same time ancient-that is stirring among us today, to pray again in the living cathedral of the universe.

When my wife and I first arrived on Iona in 1988 to take up leadership at the Abbey, the weekly pilgrimage around the island did not even stop at the Nunnery. It is difficult to believe, but the pilgrimage route walked right past it. Most of the historical focus has been on the rebuilt Abbey. History -which in the Western world has usually implied *his* story-has focused on the life of men in religious community. Her story, on the other hand, the life of women in community, has been almost entirely neglected.

The desire to pray in the Nunnery is the desire to pray again in relationship with the earth. Directly related to this is the desire to come back into relationship with the feminine as sacred. Our religion, like so much of our Western culture, has suffered a tragic imbalance. The neglect and exploitation of the earth have gone hand in hand with a subordination and abuse of the feminine. This has often included a fear of the feminine and its deep birthing energies. Praying in the Nunnery is part of the growing desire in us to bring back into relationship again so-called opposites that have been torn apart, the masculine and the feminine, as well as the life of humanity and the life of the earth.

In New Harmony, Indiana, there is a modern place of prayer that dresses this same yearning. It is called the Roofless Church. It has four defining walls, but there is no roof. Like the Nunnery, it sits open to the elements. It was created under the inspiration of Jane Blaffer Owen, one of the most beautiful and wise women I have ever known. Over fifty years ago, well in advance of today’s earth awareness movement, Jane Owen saw that our sacred sites must not be represented by separation from the elements. Our holy gathering spaces must not be characterized by division from the creatures and from earth’s other peoples and religious traditions.

At the heart of the Roofless Church is a sculpture by the Jewish artist Jacques Lipchitz. It is called The Descent of the Spirit, In the form of a dove the Spirit descends onto an abstract divine feminine from that opens to give birth. At one level Lipchitz is pointing to the Jesus story, conceived by the Spirit in the womb of Mary. At another level he is pointing to the universe story. Everything is conceived by the Spirit in the womb of the cosmos. Everything is sacred.

Jane Owen met Lipchitz in New York City at the end of the Second World War through the German-American theologian Paul Tillich. Lipchitz had escaped Nazi-occupied France with the help of a Roman Catholic priest in Plateau d’Assy. Even before his escape, he had conceived the idea of the sculpture. In New York he shared his vision with Jane Owen. She commissioned him to create three casts of the piece. One was to be in the Roofless Church of New Harmony. The second was to be in the parish church of Assy in France. The third was to be in the National Church in Washington, D.C.

The church leaders agreed in principle to feature the sculpture, but when they saw it, they refused to accept it. It was too explicit in its representation of the Divine Feminine opening to give birth. So instead, as Jane Owen explained to me when I met her many years later, they commissioned another artist to create a statue of George Washington riding a horse! The young Jane Owen was upset by their refusal. She went to New York to pour out her soul to a religious sister who told her there was someone visiting from Scotland whom she could meet. His name was George MacLeod. He and his young Scottish community were in the midst of building Iona Abbey.

I would have loved to be there for that first meeting. Jane Owen was as formidable a feminine presence as George MacLeod was a masculine energy. They later became good friends, but on the first occasion they had only a few minutes together. Jane said to George, “The third cast belongs to Iona.” To which George replied, “We Presbyterians would find it difficult to live with a sculpture of Our Lady, but if she were to arrive with a dowry we would find it easier to live with her.” So she arrived with a dowry, and that dowry paid for the rebuilding of the cloisters of Iona Abbey.

George MacLeod was right, of course. Scottish Presbyterians would not find it easy to live with a sculpture of Our Lady, and especially its explicitly feminine birthing form. Nor would they find it easy to live with Lipchitz’s name on the piece, Our Lady of Delight. They might not know what to do with the Divine Feminine, but they also would not know what to do with delight! So MacLeod renamed the sculpture The Descent of the Spirit, and there she sits in the cloisters of Iona Abbey. Every time I see her I feel that her time has come. More and more it can be said that she belongs to this moment in time. She represents the recovery of the feminine that we are in the midst of, and with the feminine recovery of the awareness that everything is born sacred.
-John Philip Newell, The Rebirthing of God (pg. 2-4)