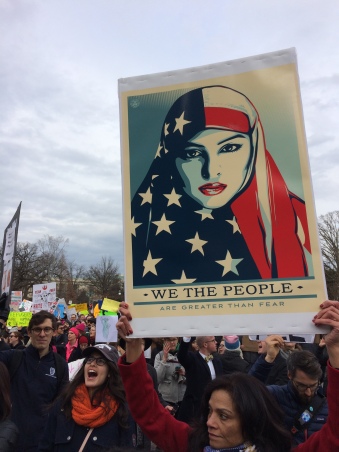 There seems to be the implication that people are overreacting while the President goes about business as usual.

That former presidents did similar and people are reacting simply because they’ve been duped by the media.

That’s not why people are upset.

That should be obvious but I’ve seen countless posts saying otherwise. The question is: what is the heart of our nation? Why is THIS President doing these things. The policies he is putting forth punish a population of people and we have to ask why. Do we punish people because of gross generalizations and xenophobia? Many of us were led to believe these generalizations by the campaign speeches and promises of the last year.

Do we punish people because of our own ignorance? Are we prohibiting people from entering our country simply because we do not understand them or fear their religion or culture? Are we tearing families apart because they came here illegally or do we desire to give them a path to citizenship? Are we making up myths about Syrian Refugees and making them the scapegoat for the violence in the world? Are we taking one act of violence and using it to define all similar looking people?

These are not things Obama or Clinton did. They never lead us to scrutinize entire religions and races. And regardless of what you will say, Trump has brought this to the American public. What is happening now are things that Reagan and BOTH Bushes stood against.

We are upset because many of us do not believe this is happening for safety reasons, but because racism is at play in our highest office. And it wasn’t the liberal media who gave us those words. It was the tweets, it was the speeches, of the President of the United States.

As a Christian I see things, like “we don’t lock our doors because we hate the people on the outside, but because we love the people on the inside.” Which is all well and good but what if that person on the outside is desperately looking for safety from people who wish them harm and is knocking on your door? What does it take for the person in danger or the person desperate for opportunity for their family to become your family? And shouldn’t this be our goal as believers?

And so we protest not to be against a person but to stand FOR the American. The most inclusive word in the world.

These issues are complicated. Nobody would question that. And at times there is a cost. But may that cost never lead us to forget the valuable lesson Dr. Seuss taught us, that “A person’s a person, no matter how small.”