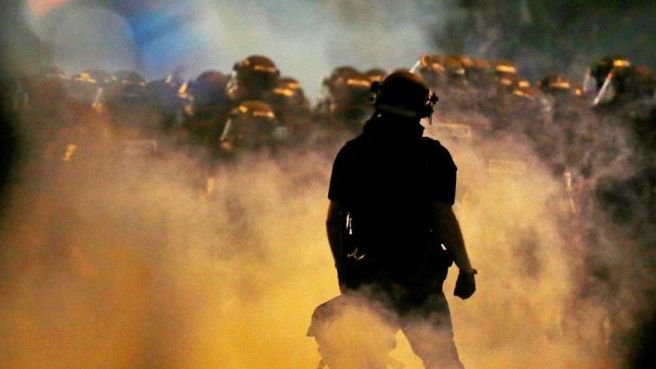 Oppressed people cannot remain oppressed forever. The yearning for freedom eventually manifests itself, and that is what has happened to the American Negro. Something within has reminded him of his birthright of freedom, and something without has reminded him that it can be gained. Consciously or unconsciously, he has been caught up by the Zeitgeist, and with his black brothers of Africa and his brown and yellow brothers of Asia, South America and the Caribbean, the United States Negro is moving with a sense of great urgency toward the promised land of racial justice. If one recognizes this vital urge that has engulfed the Negro community, one should readily understand why public demonstrations are taking place. The Negro has many pent up resentments and latent frustrations, and he must release them. So let him march; let him make prayer pilgrimages to the city hall; let him go on freedom rides -and try to understand why he must do so. If his repressed emotions are not released in nonviolent ways, they will seek expression through violence; this is not a threat but a fact of history. So I have not said to my people: “Get rid of your discontent.” Rather, I have tried to say that this normal and healthy discontent can be channeled into the creative outlet of nonviolent direct action. And now this approach is being termed extremist. But though I was initially disappointed at being categorized as an extremist, as I continued to think about the matter I gradually gained a measure of satisfaction from the label. Was not Jesus an extremist for love: “Love your enemies, bless them that curse you, do good to them that hate you, and pray for them which despitefully use you, and persecute you.” …. So the question is not whether we will be extremists, but what kind of extremists we will be. Will we be extremists for hate or for love? Will we be extremists for the preservation of injustice or for the extension of justice? In that dramatic scene on Calvary’s hill three men were crucified. We must never forget that all three were crucified for the same crime–the crime of extremism. Two were extremists for immorality, and thus fell below their environment. The other, Jesus Christ, was an extremist for love, truth and goodness, and thereby rose above his environment. Perhaps the South, the nation and the world are in dire need of creative extremists. -Martin Luther King, Jr.

I’m waking up on the morning of yet another violent riot in response to an unarmed black man being killed by law enforcement.

I’ve already seen status after status speaking to this being the problem. That Black Lives Matter are a bunch of crazed lunatics spreading violence across our nation. And that ultimately their arguments and protests are invalid because of the violence we see.

I can’t speak out against Hillary Clinton without someone bringing up Donald Trump.

I can’t speak out against Donald Trump without someone bringing up Hillary Clinton.

I can’t speak about aid for Refugees without hearing about our local problems.

We are so divided in America that we silence rebukes and passion for the sake of other problems.

As if bringing them up invalidates the problem someone is speaking into.

It’s like we want to protect our side or passion so badly we hide our sin and expose someone elses.

Franciscan mystic Richard Rohr speaks frequently about the process of “scapegoating.”
It’s reference to the times of sacrifice where you would place your sins on a goat and sacrifice it to be absolved. He writes here:

We Christians, who dare to worship the scapegoat, Jesus, became many times in history the primary scapegoaters ourselves—of Jews, heretics, sinners, witches, homosexuals, the poor, the natives in the New World, slaves, other denominations, and other religions. It’s rather hard to believe that we missed such a central message.

The pattern of exporting our evil elsewhere, and righteously hating it there, with impunity, is in the hardwiring of all peoples. After all, our religious task is to separate from evil, isn’t it? That is the well-disguised lie! Any exclusionary process of thinking, any exclusively dualistic thinking, will always create violent and hateful people on some level.

This I state as an absolute, and precisely because the cross revealed it to me. The crucifixion scene is our standing icon stating both the problem and the solution for all of history.

We need to own our evil and the evil that can represent us.

The other day I was driving by Donald Trumps winery in Charlottesville, Va. I pulled off the road to take in the beautiful view of his property when some of his supporters pulled over to ask me who I was voting for and if I was voting for Trump.

I said I really struggled with his character and many of the things he’s said about other people. Her reply “Well nobody likes that! But we can’t have Hillary.”

I calmly asked if she saw any problem with that. I said what I greatly desire is to see backbone from the Republicans. There are great and qualified leaders within that party and they shouldn’t sit by so cooly while that man takes away all of their integrity. You don’t have to have a candidate who crosses the lines. You don’t have to have a candidate that is rude to citizens and disrespectful to nations. I asked “Can you defend your candidate without bringing up Hillary Clinton?” And she looked at me with disgust and they drove away.

Whenever I bring up Hillary Clinton and someone mentions Trump I can’t help but say “But I’m not talking about Trump right now. I’m talking about Clinton.”

I should be able to speak out about the awful actions we have seen from Donald Trump’s presidency without the assumption I’m Hillary Clinton’s number one supporter. (I’m not.)

I should be able to speak about the Black Lives Matter movement without the assumption I’m indifferent the the lives of police officers.

When people bring up Hillary Clinton or the death of police officers it doesn’t invalidate that there are real problems coming from Trump’s campaign and from our law enforcement.

We should demand better from everyone. We shouldn’t wake up the morning after the murder of an unarmed black man and see videos of black men beating up a lone white man in a parking garage.

We should own our evil. We should be above reproach in a demand for justice. Check the plank in our own eye. Always.

Let’s deal with the problem we are talking about. Focus on it. Stay on topic. And not dismiss the evils people speak of.

Speaking out against an email scandal doesn’t mean one validates the alternative. That’s not even fair logic.

Just because a black sniper kills officers does not mean the problem of racial injustice is a myth. These both are problems. Just because communities loot and destroy doesn’t mean they’ve lost a reason to be upset.

Sin does not cover sin. But perfect love covers a multitude of sins.

Keep your ears, and your heart open.

Let evil be evil. And seek the Kingdom of God. Where Justice prevails.