That at the time of the Summer of 2010 was one of the top most exciting moments of my life. My friend James had a gut feeling that something big was coming and thank you Jesus he decided to film it. This moment for those unaware was a BIG DEAL.

The song being played is called The Last Stop it is a fan favorite and had been absent from shows for four years. It was the song every venue wanted every fan wanted and I was there to hear it’s glorious return. My friend Chris and I had to slap each other to make sure that moment was real. Needless to say we slap like men. It was a night we would never forget. It was a night we thought would never be topped. We were wrong. 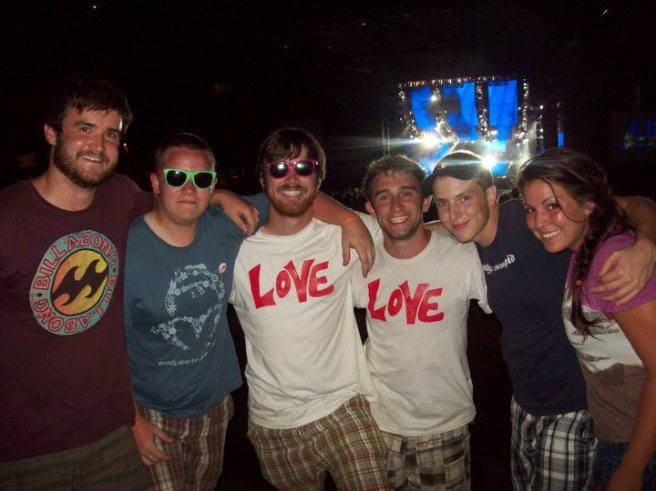 Warnings before reading this: It will be lenghty but I PROMISE to do my very best to make it fun and interesting.  Any DMB fan should appreciate this. Also: After reading this (if you do not know already) you will see that I might be a little fanboy. It’s okay. I’ve accepted it. Moving on. The following is the story of the best week of my life. I feel like it will remain that for several years to come…maybe marriage will top it. (maybe.)

I am a very large fan of the music of Dave Matthews Band. As of 2011 I have seen them play 13 times (believe it or not that is a low number by some’s standards). The highlight of my year since 2008 has been seeing them live.

In 2010 they announced that they would take 2011 off from touring. This would be the first time in twenty years (since they started) that they would not tour. As in the 2010 tours were in a way a “goodbye for now”. So naturally the question on all the fans minds was “Where would the last show be and how much is it going to cost me?”

While in West Palm (video from above) we received notice that the final show of the year would be in Charlottesville, Virginia. The band’s hometown. The place where it all began. The Mecca for DMB fans. As the lights went out in West Palm Beach we all looked at each other and in unison said. “We are going to Cville.” Whether or not we thought that would actually be a possibility I do not know.

We all returned to our normal lives and then after a few months the time came. They announced the opening act would be Trombone Shorty. The band that I had just recently really gotten into after seeing their Bonnaroo set. I now HAD TO GO. So finally I geared up for the question. The question that would determine it all. PREFACE: I am 19 years old and all my time is spent volunteering for an organization called young life and making films. A.K.A. I am a  very poor college student. So this money would have to come from my parents. So as nicely as I possibly could. I walked up to my parents “Mom, Dad, I was wondering if I could maybe get an early Christmas present.” I presented the idea and to perhaps the biggest shock of my life my Dad replied with “I think we could do that.” This was the beginning of the biggest best luck streak of my entire life.

They said yes. So naturally the first thing I did was call up my buddies Will and Chris. They amazingly were also given the opportunity for this trip. The planning began. Where would we meet? Where would we stay? What would we do?

In regards to the meet up. I (Devon) live in Tallahassee,Fl. Chris in Atlanta,Ga. Will in Columbia,SC. It was all about the meet up. More importantly where would I meet them. The Fall tour’s final four shows were Atlanta, Ga, North Charleston, SC, and two nights in Charlottesville, Va. Convenient much?

Now this trip was obviously very expensive and the original plan was to do the final three shows. Meet everyone in Columbia about six hours from Tallahassee and then we all drive together to Virginia. By means of where we would stay: Early on I suggested that we camp out in the mountains. I figured this would be very cheap and was correct. It would be only 25 bucks a night split three ways. DIRT CHEAP. Will then informed me it would more than likely be ICE cold. He suggested the hotel room. I was hesitant because I couldn’t afford that. He then called and said as a birthday present his mother would cover the hotel room fee cost. BOO YA! He shortly after called back and said “Hey my mom’s just going to get us a cabin at that campground. Can you say “best of both worlds”? This trip just got MEGA Awesome. So our sleeping sitch for Cville was settled. I then had to decide how I would meet up with them.

I decided the best thing to do would be to go to Atlanta (the night of the show) and then ride with Chris to North Charleston.  Chris had his dorm in Atlanta and Will had a beach house in South Carolina. (if you haven’t noticed Will is one of those friends you want to have hahaha).

I checked with all the teachers and got the approval from all my teachers to go on “a family vacation”. Now came time of Getting the tickets. This. Was. The. Most. Stressful. Situation. Ever. Because Charlottesville was the last stop of the tour and the last shows for potentially a year the demand was HIGH. as in it would sell out in minutes. I, like every other individual, was going for pit tickets (pit is general admission front stage). Pit means potential for front row. Pit means potential for front row at the last show of the year. I skipped class to wait on ticketmaster and try and get these suckers. I had three people on three computers each buying tickets for the three final shows. I feeling most confident went for the pit for the night 2 show in Cville. My brother went for pit night 1 in Cville. And my dad (the elder) went for the not as important North Charleston tickets! I set up everything the day before. I had myself logged in before 10am. I was ready to go. My heart was RACING and my finger ready to test my reflex to a clock striking ten. The clock hit ten I went in and “THERE ARE NO TICKETS AVAILABLE”. EFFFFF! I quickly refreshed and was able to get an amazing ticket side stage on the front row of seats. I was content. My brother got me a pit ticket for night 1. And my dad got me a dandy seat for North Charleston. We all were able to get our tickets. (after some issues haha)

It was official. We were going to Cville. We had tickets to the holy grail of DMB shows. Will and I both were able to get pit to Cville night 1. Sorry Chris :(. After officially getting the tickets I immediately decided to make the facebook event “THE LAST STOP OF 2010”. I decided this would be the easiest way of contacting all the hardcore fans that were going.

The first thing I sent out was the idea of getting everyone to bring plastic spoons to the show. I stated that we would be the venue that got Spoon to come back. (See “The Story of Spoon” located on the top bar). Will and I for the West Palm show joked about doing mustaches. So for Cville we decided we would actually do it. We decided we would all do plaid sports coats to spice it up. We then decided “let’s just get everyone to do it”. So we sent out another mass message telling all the fine gentlemen to wear plaid and have mustaches. Easily one of the most genius ideas of the century. We surprisingly got a very positive response.

The trip was planned. Drive to Atlanta. (not go to the show) then ride to North Charleston, spend the night in a condo, wake up early, drive to Cville stay in the cabins. But in one weeks time my situation got betta…and betta.

Will called me up with fantastic news. “Hey man my mom doesn’t want to stand all night so could she trade her pit ticket for your seat”…..ummmmmm YES!? I now had two pit tickets back to back. Chris then called me up and said “hey I feel awful that you can’t go to the Atlanta show so I’m going to buy you a ticket.” Ummmmmmm Jesus loves me this I know! Chris is a dang good friend to be that generous so I came up with a scheme that would pay him back! This was a handful of good luck all at once. Chris banked out and got a pit ticket to Atlanta and I was now going to the final four shows of the tour.

The time then came for the trip. The bag was packed. The new glasses were bought. The gas tank filled. The car windows painted. The playlist ready to go. The tickets in a folder on the passenger seat. The prayers said. The key in the ignition. The engine rev’d.

***CONTINUED IN OPERATION:MEGATRIP PART II:THE BEST WEEK OF MY LIFE****

One thought on “Operation:Megatrip Part I: Preparation”